On Tuesday, students headed off for their first day of wizard school classes. On tap for them were: Charms & Hexes,

Professor Sage Radcliffe taught the difference between charms & hexes, and charged her students with making a charm of their own for homework. She also showed them her personal collection of North American House Hippos — all  19 of them. Well, 18. Charlie is missing again.

Professor Scugg talked to the students about loup-garou, snipe, and gremlins in cryptozoology. The students were concerned that Prof. Scugg’s gremlins were underfed, and went on a snipe hunt to locate and collect gremlins’ favorite food. While showing the students the spirit cryptid, the Memmic, it got loose on campus, and every once in a while seems

to take the form of one or more of the faculty. The Memmic repeats and does whatever they see or hear, and thankfully the students are getting adept at not feeding the Memmic when it appears. It is, unfortunately, still at large, however.

Prof. Diego and the Captain taught the students about wand grips: Knight, King, Queen, Bishop, and Rook, and students practiced moving between them quickly. Homework was done quickly and enthusiastically as students contemplated their favorite spells and which position was the best for casting them. Many Court Points were earned for skill and excellence! 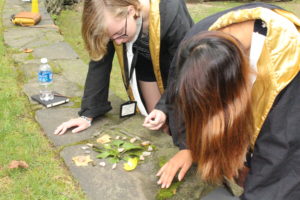 In herbology, students worked on identifying plants and knowing which were useful. They also created nature mandalas from leaves, sticks, and flowers. They are working with Prof. Kase, who was raised by the Fae, and deducts points if you thank her. Prof. Kase, Herbology, and Prof. Scugg, Cryptozoology, are also engaged in a long-standing (and loud) argument over whether the cactus cat is a cryptid or a plant. The answer “both” is not allowed. Prof. Kase’s cactus cats have been taken to Prof. Scugg by cryptid supporters, and returned to Prof. Kase by plant supporters. There appears to be no end in sight to the controversy.

In Runic Magic, students learned about the different types of rune systems, which they immediately applied to other languages, such as Chinese and Russian. They learned classic futhark runes, and were charged with writing their own rune system for homework.

Tuesday night electives took place after dinner. Choices were: Fireball, a wizard world sport similar to mundane Dodgeball, but played with three fireballs, and a limbo zone. Each team defends their nest. Also held was instruction in The Oldest Game, a form of wizard dueling that involves wit and shapeshifting to out-imagine your opponent. Wand

Analysis & Attunement was taught, and students learned about their wand’s wood, core, length, and shape and what that means to them as a magic caster. Some students went dowsing for ley lines, using geometry and divination to locate, map, and repair these magical currents deep in the earth. Many students went on the snipe hunt in the amphitheater and forest, and a large group took part in Wand & Blade, where the Captain taught them swashbuckling footwork and sword use. One student challenged a wandering Fae to a duel, rather ill-advisedly. She was attempting to help her Counselor recover from her Fae Curse, but the Fae would not concede unless beaten. Sadly the student did not overpower the Fae in the fight, but there are still two more nights of Wand & Blade to improve their skills.

After electives, students took part in their Court Rituals, custom ceremonies with their fellow Courtmates designed by the counselors. These bonding ceremonies were very special to the students, and afterwards they had popcorn and snacks and mingled before preparing for bed at the end of a long day of magic.